We are experiencing high call volumes: Use your account on the Mayo Clinic app or patient portal to check symptoms, get care recommendations and make an appointment.

Menopause can be a blessing for those with a history of heavy periods and pelvic pain, but it also can be a curse for others with new-onset frequent hot flashes, drenching sweats, sleepless nights, mood swings, vaginal dryness and urinary disturbances.

Menopause is defined as the cessation of the menses, and it is recognized to have occurred after one year of no menses. In the U.S., an estimated 6,000 women daily and more than 2 million women yearly reach menopause. With an average life expectancy of 81, women are spending greater than one-third of their lives in menopause.

Are you in menopause?

If you have not had a period in the last consecutive 12 months without an obvious cause for it, such as hormonal medications, thyroid problems, pregnancy or a prolactin disorder, you might be in menopause. Elevated levels of follicle-stimulating hormone can suggest menopause or perimenopause in a blood test. This blood test is not necessary to diagnose menopause, however.

Symptoms associated with menopause include:

These symptoms can begin before menopause, including the final menstrual period, during a phase called menopause transition. Hot flashes typically peak during the first two years after your last period, lasting on average for three to five years. In some women, hot flashes can last for 10 years of more.

Perimenopause includes the menopause transition phase, and it lasts up to one year after menopause.

When and why does menopause happen?

Natural menopause happens when the ovaries permanently stop releasing an egg every month. The median age of natural menopause is 51. At birth, the ovaries contain about 1 to 2 million eggs contained in follicles. A significant proportion of these eggs undergo death through a process called atresia, leaving only 400,000 eggs at the time menstruation begins.

With each menstrual cycle, roughly 1,000 follicles are recruited, but only one of these matures to become the dominant egg that gets released into the fallopian tubes in preparation for a potential pregnancy through a process called ovulation. Follicles produce estrogen.

On average, a woman ovulates about 400 eggs in a lifetime. Once the ovaries run out of follicles, the estrogen levels drop and natural menopause occurs. This natural drop in estrogen, particularly a form of estrogen called estradiol, usually is gradual and leads to the symptoms associated with menopause and perimenopause. After menopause occurs, the body continues to produce a weaker form of estrogen called estriol that helps mitigate the symptoms.

When menopause happens before 40, it is called premature ovarian failure. This can be caused by autoimmune disease, a history of ovarian surgery, chemotherapy, radiation, Turner syndrome and fragile X syndrome. Surgical menopause happens after the surgical removal of ovaries. Induced menopause is menopause caused by surgical removal and by medications, such as Lupron, which is used to treat gynecological problems, including pelvic pain and heavy bleeding.

What are long-term health risks associated with menopause?

The lack of estrogen affects various systems in the body:

What is hormone replacement therapy? Am I eligible for it? Is it safe?

Hormone replacement therapy involves replacement of the estrogen hormones to help alleviate distressing menopause-related symptoms. If you have a uterus, you also will require progesterone to prevent excessive thickening of the uterine lining that can lead to precancer or cancer of the uterus.

Currently, hormone replacement is approved and considered safe for use in these ways:

In these cases, it's recommended to start hormone replacement within the first 10 years of menopause. New studies suggest potential benefits for mood, sleep and joint aches. Surgical removal of ovaries leads to a more abrupt drop in estrogen levels and more drastic symptoms, and this is often benefited by hormone replacement.

Vaginal estrogen in the form of a cream or ring can be used in women who are more bothered by the genitourinary symptoms of vaginal dryness, urgency and increased frequency of urination. Low-dose topical formulations of testosterone, along with estrogen replacement, have been shown to improve sexual satisfaction in women who are past menopause.

Testosterone therapy has not yet been approved by the Food and Drug Administration (FDA) for use in women, and it can be associated with theoretical risks of abnormal lipid panels, clitoral enlargement, abnormal hair growth and acne.

Hormone replacement therapy should be used with caution in women with a history of stroke, heart attack, increased risk of blood clots, history of clots in the lungs of legs, breast cancer, estrogen-dependent cancers, allergy to estrogen, liver dysfunction and/or unexplained vaginal bleeding.

Are there any nonhormonal medications useful in managing menopausal symptoms?

The FDA has approved paroxetine, an antidepressant, for hot flashes associated with menopause. It can be used in women who have contraindications to traditional hormone replacement or who do not want to use hormonal medications. Other nonhormonal medications, such as gabapentin, pregabalin and clonidine, also have been used to manage hot flashes.

Phytoestrogens, such as soybeans, herbal remedies, including St. John's wort, black cohosh, ginseng and vitamins, have been proposed to help with menopausal symptoms. In the U.S., none of these complementary medicines have been approved by the FDA for the use in menopause. Most studies have not shown that these have had much benefit over placebo in helping with menopausal symptoms.

Exercise, avoidance of caffeine and alcohol, a well-balanced diet, dressing in layers, maintaining a low temperature in your surroundings and consuming cool drinks can reduce the severity of your symptoms.

Ginny Clementson, is a nurse practitioner specializing in OB-GYN and prenatal care in Le Sueur and Mankato, Minnesota. 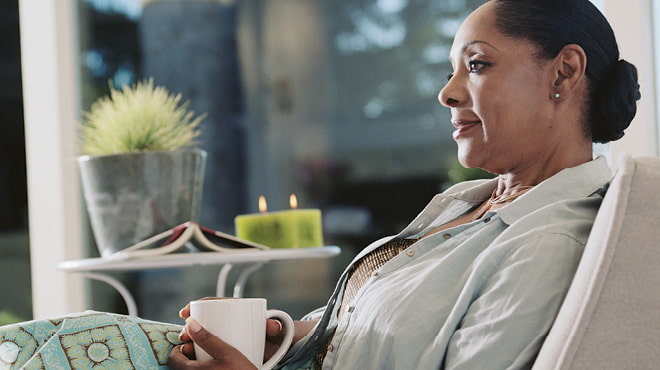 Should you be concerned about post-menopausal bleeding?
Menopause transition: What's normal? 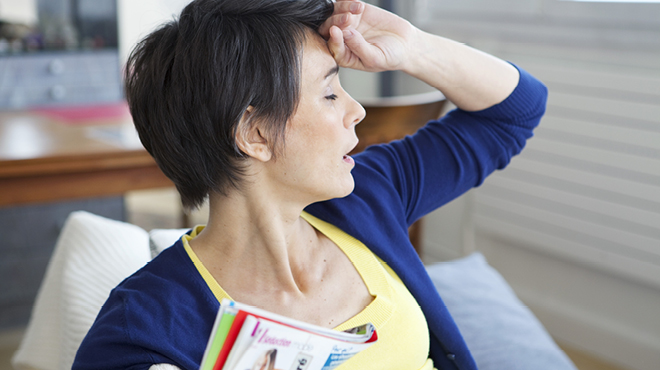