Coronavirus Disease 2019 (COVID-19): If you have questions about how to receive care during this time, including information about video appointments and other options, visit our COVID-19 page.
ERROR! 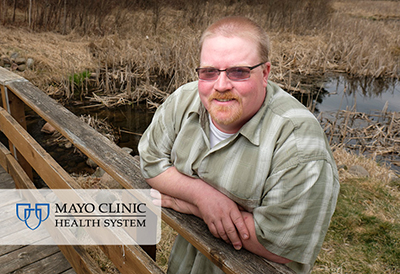 Steve Brock thought he had slept on his arm wrong, causing it to go numb. He didn’t learn until a few days later that he was having a stroke.

“It felt like my arm was asleep, says Steve, 36, of Cameron, Wisconsin. “I really didn’t think anything of it. I went back to sleep.”

That was around 2 a.m. on a Saturday in February 2017. Steve felt sick throughout the weekend, but thought he had the flu and a nasty headache. It wasn’t until Monday morning that Steve realized he had a bigger problem.

“I got up to go to work, and I could hardly see anything,” Steve says. “That’s when I knew I had to go to the emergency room.”

Leonardo Fugoso, M.D., the neurologist who treated Steve in Eau Claire, says it is common for people to put off seeing a doctor, hoping their symptoms will go away.

“That is a huge mistake,” Dr. Fugoso says. “It is crucial for people to get emergency medical care immediately. The clot-busting medication is more effective given as early as possible but can, in certain instances, be given up to four and a half hours of having a stroke. Prompt medical attention also can help to determine if the clot from the stroke can be removed.” A stroke can be caused by a clot that becomes lodged in an artery, blocking the blood flow, or by a narrowing or closing of an artery. Medication given early after symptoms begin can help prevent damage.

Steve says he thought he was too young to have a stroke. But Dr. Fugoso points out that a recent study published in the Journal of the American Medical Association Neurology found rising stroke hospitalization rates among men and women between age 35 and 44. That was associated with a doubling of stroke risk factors, such as high blood pressure, diabetes, high cholesterol and smoking.

Steve says he wishes he would have taken better care of himself before his stroke. On the advice of Dr. Fugoso, he has made some changes.

“I used to eat as many as three meals a day from a drive-through,” Steve says. “I’m eating better now, I’m losing weight, I quit smoking and I try to get more sleep.”

After receiving physical therapy, Steve is back at work as a maintenance warehouse supervisor, though he had to cut back on his hours because he tires quickly. He says poor short-term memory is another lingering effect of his stroke, and he doesn’t remember much from the three days he spent in the hospital. He still suffers from tunnel vision, which was constant at first, but now comes and goes. Despite his ongoing challenges, Steve knows it could have been worse.

“Really, ultimately, I could have died,” Steve says.

Dr. Fugoso advises people to be familiar with the American Stroke Association’s guide for identifying stroke symptoms, using the acronym of FAST:

F: Face drooping or numb on one side
A: Arm is weak or numb
S: Speech difficulty, slurred speech
T: Time to call 911

As for Steve, he now tries to warn others so they can avoid the trouble he has had.

“I tell people, ‘There’s no flashing light saying you’re having a stroke,’” Steve says. “If you experience something like one side of your body goes numb and there’s no explanation for it, go to the doctor right away.”