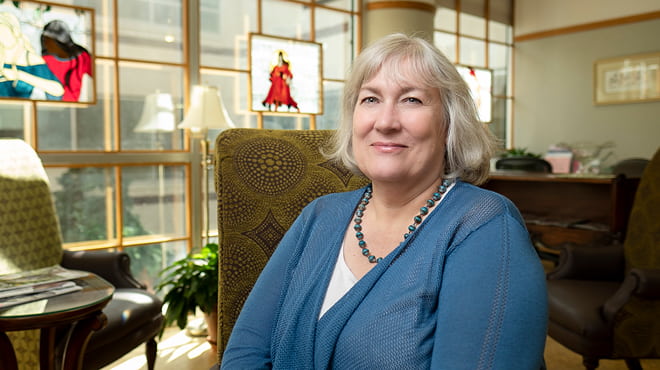 “I was just going in for a routine mammogram,” says Jan Jenswold, 61, of Eau Claire, Wisconsin. “I don’t usually think about it. I don’t have a family history of breast cancer, so I wasn’t worried.”

But this time when she went for her mammogram at the HERS Breast Center at Mayo Clinic Health System in Eau Claire, the scan showed something concerning. Jenswold had a follow-up 3D mammogram known as digital breast tomosynthesis (DBT). This allows breast tissue to be viewed in individual segments, showing greater detail.

“I’m really glad I got the 3D mammogram,” says Jan. “That’s what picked up on the tumors, because they were actually really small.”

A biopsy confirmed the diagnosis. Jan had breast cancer. While the news took her by surprise, she says she was not as frightened as she thought she would be. Jan, who works as a supervisor in Outpatient Behavioral Health at Mayo Clinic Health System, had confidence in her care team.

“Everybody I talked to on the staff was so encouraging,” Jan says. “I read everything I could. I looked at wigs and prosthetics in case I needed to have surgery or chemo. I wanted to be prepared.”

Because Jan’s cancer was detected early, she had an encouraging prognosis. She feels lucky that her cancer could be removed with a lumpectomy. Further testing revealed that she would not need to undergo chemotherapy, but she did have radiation therapy for four weeks. Fortunately, Jan says radiation therapy was easy for her and she experienced no side effects. Jan is able to further reduce her chance of recurrence by taking hormone-blocking medication.

The fact that Jan had no family history of breast cancer is not unusual, says Megan Meyers, M.D., a radiologist at Mayo Clinic Health System.

“One in 8 women will be diagnosed with breast cancer, and most breast cancers are actually not hereditary,” says Dr. Meyers. “So it is really important for women to come in and get screened, even if there is no history of breast cancer in their family.” Dr. Meyers says women age 40 and over should get a mammogram every year.

Two years after her diagnosis, Jan says she feels fortunate.

“I really feel lucky,” Jan says. “I’m doing great. It feels like it was a long time ago. Sometimes I forget it happened at all.”

Jan knows firsthand that a cancer diagnosis can be scary, but she says experiences like hers show there is good reason to have hope for a positive outcome.

“You need to stay optimistic,” says Jan. “It’s not the same news it would have been 30 years ago. We’ve come so far. There are so many targeted treatments.”

Jan is thankful that she has yearly mammograms, even when it would have been easy to let it slide for a year or two. She hopes her example will inspire others to do the same.

“Get in there, and get it done,” Jan says. “You don’t want to be the person who finds out it’s too late for effective treatment.”