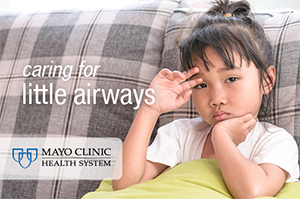 As a pediatrician, I see many illnesses and have had many sleepless nights as a mother with small children battling illness. The most common culprit? A lower respiratory viral infection called bronchiolitis. I truly love discussing bronchiolitis, because this is a disease that we only see in young children under the age of 3.

Bronchiolitis impacts the small airways, which commonly causes nasal congestion and discharge, cough and, sometimes, wheezing in young children. All children are susceptible to bronchiolitis. If your baby was born prematurely, has heart or lung disease or is younger than the 4 months, they are at a higher risk of acquiring this illness. Many viruses can cause bronchiolitis. The most common virus is respiratory syncytial virus (RSV).

Your child may or may not have one with this illness. Call your provider if:

With breathing difficulties, your child may look like he or she is sucking in his or her neck and rib muscles, or his or her breathing may be faster than normal. In young infants, especially newborns and those less than 4 months, they can have long pauses in their breathing or stop breathing. This also is concerning. Babies normally breathe through their nose. When they are stuffed up, they can’t breathe through their nose and often have difficulty eating. This can lead to poor feeding, which can contribute to dehydration (see below).  This also can lead to sleep intolerance (see below). If your child is having any of these symptoms, then they need to be evaluated immediately.

Consider bringing your baby to see your health care team if he or she is making less than one wet diaper every six hours or has a significant change in wet diapers. As a reminder, infants up to 12 months should only receive breast milk, formula or a children’s electrolyte drink to help with hydration.

Changes in skin color or tone

Especially for newborns, younger infants and preterm infants, viruses can cause changes in skin color or tone. If your child starts to change color or tone, watch him or her carefully. For example, if he or she begins to look blue, white or pale — or appears limp or floppy — see your provider.

Children of all ages commonly get six to eight colds in a long season. This happens even to children with healthy immune systems, simply because they are being exposed to new illnesses. So, what do you do for them?

For some, this illness will come and go without severe symptoms. For others, that won’t be the case. I suggest all parents become familiar with these symptoms so the illness does not become more serious. If you have any questions, call your provider.